A history of hard work has led to a history of accomplishment for Joe Koppeis, the leader and driving force behind Admiral Parkway’s vision and successes.

Joe Koppeis grew up in the food business. His first job at the age of 13 was scrubbing floors and cleaning meat equipment. Over the years, he held various jobs related to the food industry from managing food stores to supervising multiple stores and selecting sites for new stores. His last job before going into business for himself was Director of Sales Development for Wetterau Foods in St. Louis.

After leaving Wetterau Foods, Joe built, owned, and operated The Market Place, a 44,874 sq. ft. supermarket for 25 years. Joe sold the grocery operation to Schnuck Markets, Inc. in 2013. Joe still owns and operates the shopping center and Schnucks signed a long-term lease for the grocery store.

Development of the area began more than a century ago when the St. Louis Valley Railroad used the site as an open-faced quarry to obtain rocks for use as railroad ballast. For most of its existence, the quarry was mined for limestone that was used for fertilizer creating the massive man-made underground rooms and tunnels. For about 50 years, the caves housed a mushroom farm. During the height of the Cold War, in the late 1950’s and early 1960’s, part of the abandoned underground was set up as a Civil Defense shelter, completely stocked with supplies to accommodate thousands of people in case of a nuclear attack.

As a result of the relocation of the Village of Valmeyer following the 1993 flood, the Village took over ownership of the quarry property in 1995. Former Senator Dave Luechtefeld was instrumental in the development of Rock City. In 2000, the Village entered into a marketing agreement with Admiral Parkway to develop the abandoned quarry into an underground business complex.

Once very primitive, Rock City is now a state-of-the-art development encompassing approximately 6 million square feet, or 137.75 acres located in an extensive man-made cave system. The temperature inside the cave averages 58°, the ceilings are 25-50 feet high, the floors are solid stone, the stone pillars are 50-60 feet apart, and there are more than 100 outside openings creating natural air flow, thus eliminating the need for duct work or fans.

In November 2007, the National Archives and Records Administration (“NARA”) chose Rock City for the location of its National Personnel Records Center Annex consisting of approximately 398,862 square feet, or 9.15 acres, of office and related file storage space. In April 2010, NARA chose to build an adjoining 75,000 square foot building for additional file storage space. The NARA buildings have private investments in the amount of $31,085,000.

The newest development is a 21-acre site between Illinois Route 3, Bluff Road and West Sand Bank Road in Columbia. This site has unbelievable visibility and is a great location for a professional center. There has never been any building or project of this size and type in Columbia or Monroe County. The first, five story professional building, 11 South, is complete and near 100% occupancy. It is a first class, multi-story building with a look and feel of quality that will last for generations. The 11 South building is a $13 million project. Meanwhile a second building, four stories in height, is scheduled for completion in 2021. Planning includes up to four buildings in the development. Each building will be built based upon market needs and demand.

Developments in Murphysboro (with a hotel), Illinois, and Farmington, Missouri are in the construction stages. We have been collecting wind data for about ten years for a wind farm to be located in Southern Illinois along the Mississippi River bluffs. Admiral Parkway has been working with a bitcoin mining company and another company to add a data center in Rock City.

Admiral Parkway has fourteen full time employees and ten part-time employees. The Board of Directors consists of Joe and Patty Koppeis.

Reach out to us for your business’s commercial development needs.

We deliver construction and development services that meet your needs and goals. 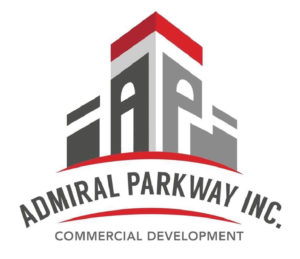